My family and I were waiting for taxi in front of Regent hotel when a cab drove in with the most exquisite face passenger.

He walked pass us and I blurted out “Leslie Cheung”.

To my surprise, he turned back with a smile and said “Yes”.  We greeted and took some photos. He was around 23, quite new among RTV leading actors but already very famous in Thailand from the role of Pung Po Yee in TV series Spirit of the Sword on TV 3 to the extent that roads were clear of traffic during airtime. The title song also a hit.

Not long after the first meeting, he held a recital in Bangkok. We went to every show and he remembered us. Leslie called me “little sister” so I called him “Gor Gor”. I was still a kid back then and even cried when he went back to Hong Kong.

Back then, there was no internet. No YouTube, IG or Facebook. Other than TV series we had to rely on newspaper, monthly magazine and video. Lucky for us, Leslie visited Bangkok quite often. He trusted us enough to go sightseeing together not unlike princess Audrey Hepburn in the movie Roman Holiday.

He often went to worship the Brahmin Shrine at Rajaprasong and put a thick fold of money bills in donation box. “For medical charity,” he said.

Leslie disliked buffet but we still brought him to buffet lunch at Siam Intercontinental before shopping at Siam Center. Big crowd followed him around but gave enough space for him to feel comfortable. In various occasion, we went to Central Department Store, Scala Theater  to watch the movie Saving Private Ryan and to The Oriental Hotel where he seemed to like the suite room there.

Once we were on the road.  In the car my little brother and I sung along Leslie’s Hong Kong OST. Suddenly, he turned to my mum and said, “Pi Noi, I am gay.” (“Pi” means older sister or brother)

“What does gay mean in Thailand?” Leslie asked.

After that, he seemed to be more open about his love life.

Leslie was nice, sincere and hardworking. He showed us slide photos of new albums and talked about “Thank You”, the song he sung for fans. Also mentioned “Wind Continues to Blow”, which granted him the title of Asia’s superstar. He opened concert in Japan and Korea and be the first Asian singer to wear high fashion brand name on stage. With costumes specially designed for him be Jean Paul Gaultier.

After his “good-bye” show, he went to live in Canada and took acting seriously with immortal works such as “A Better Tomorrow” and Oscar nominated “Farewell My Concubine”.

The event is jointly supported by the Hong Kong Tourism Board, Harbour City and LesFANmily fan club. Donations received from the YouTube stream will be donated to Hong Kong charity organization Food Angel, which prepares meal boxes for underprivileged communities in the country. 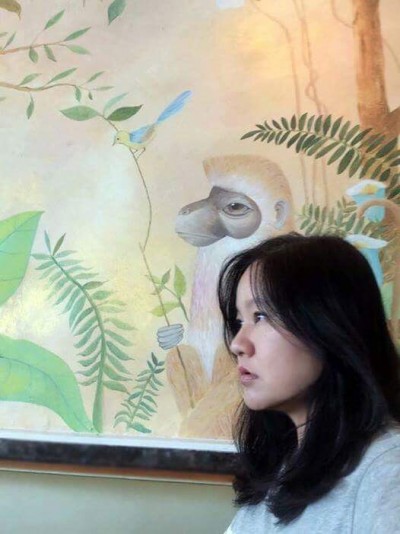